Every year, we write a manifesto that explains our thinking, and the way we shape the content of Canada’s defining startup event. This year, we’re going to get a bit philosophical, and even mathematical.

When it came time to frame the eighth year of Startupfest, we took inspiration from the number eight itself—and, rotated, infinity. Startups are about overcoming limits, either by reimagining an existing business in a new way, or by creating an entirely new industry.

Steve Blank defines a startup as an organization formed to search for a repeatable and sustainable business model. That means it isn’t just executing an existing model—it’s designed to find a new one.

The behavior of startup founders, and the expectations of angels and investors, all hinge on this one critical, often-overlooked, fact: A startup is searching for a new business model.

Finding a new business model means something very specific. Either you’re unlocking a new market (finding a new way to deliver something that already existed to new markets through new channels) or you’re launching a new product (overcoming a limitation that used to exist, but doesn’t any more.) A startup, by definition, overcomes the natural limits of existing markets and products.

In other words, overcoming limits is what makes it a startup.

When investors consider the potential of a new business, one of their most burning questions is, “what’s the total addressable market?” The notion that every product or service has a natural level of consumption, but that we can’t know what is before we bring it to that market, underlies most investment thinking.

The S-shaped product lifecycle curve is familiar to any business student. It describes the growth of a business, from the initial phase of early adoption, through mainstream demand, and ultimately, to saturation: 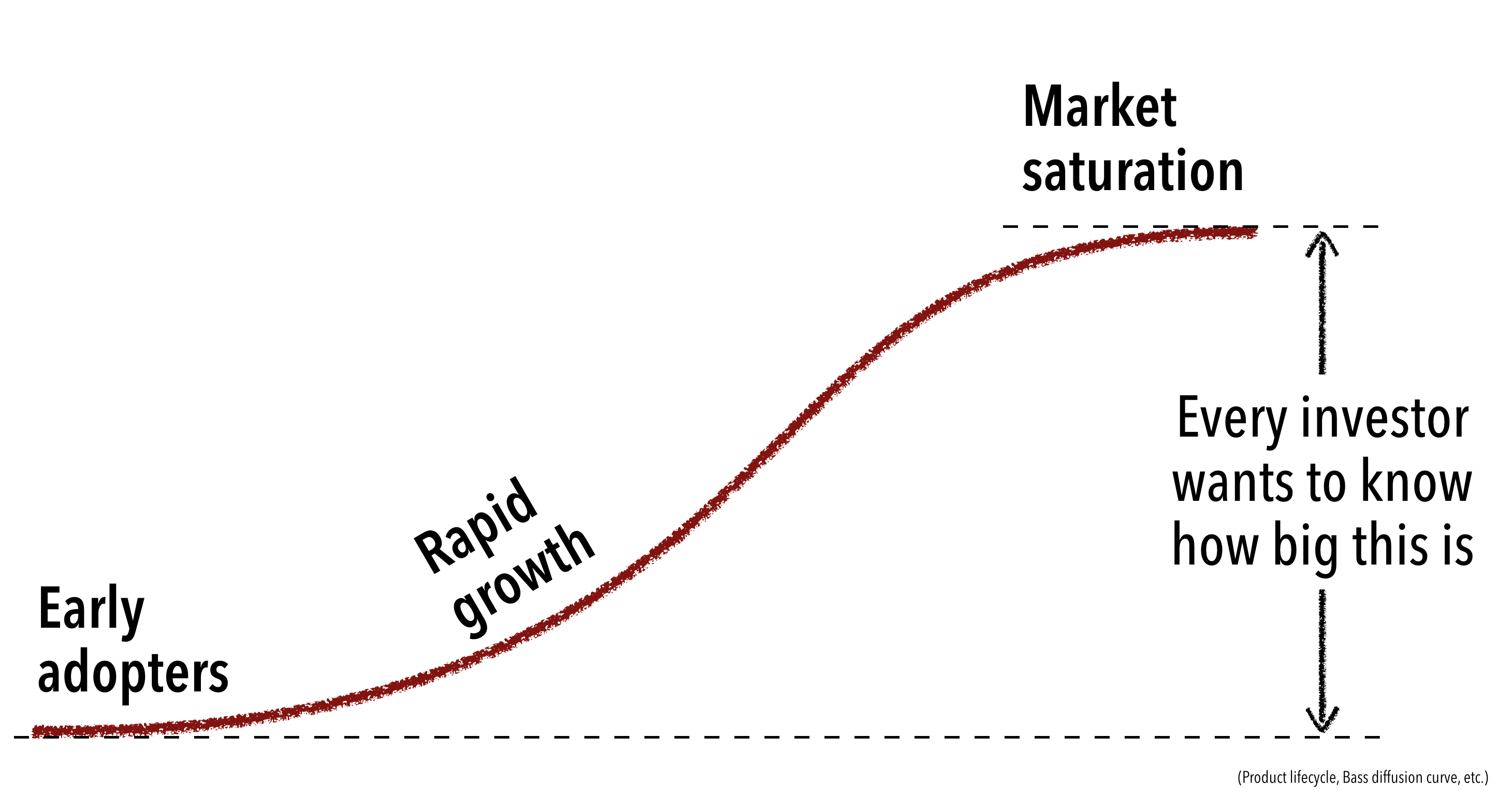 In the 1800s, the British government was at the dawn of the industrial era. A revolutionary invention—known as Newcomen’s Atmospheric Engine—turned coal into work, replacing muscles with steam. It was a simple invention, little more than piston that moved as steam expanded into it. But it was enough to change the world.

Everything ran on the coal that the engine burned, from trains to ships. So the British tasked economist William Stanley Jevons to look into how much of that coal waited in the ground.

Mid-way through Jevons’ research, the industrial era got a boost. James Watt introduced his new steam engine, which featured two sets of cylinders and condensers. Watt’s invention was four times as efficient: It needed just a quarter as much coal to generate the same amount of energy.

By all prevailing wisdom, a more efficient engine should mean that coal supplies would last longer—a simple matter of supply and demand. But that’s not what Jevons’ data showed. Instead, coal consumption had increased. The reason was simple: A more efficient engine meant lower costs, which created new, previously unimagined uses, and more demand.

This is known today as Jevons’ Paradox: Certain kinds of product create their own demand, bewitching customers and thrilling investors. In other words, some markets are paradoxical. 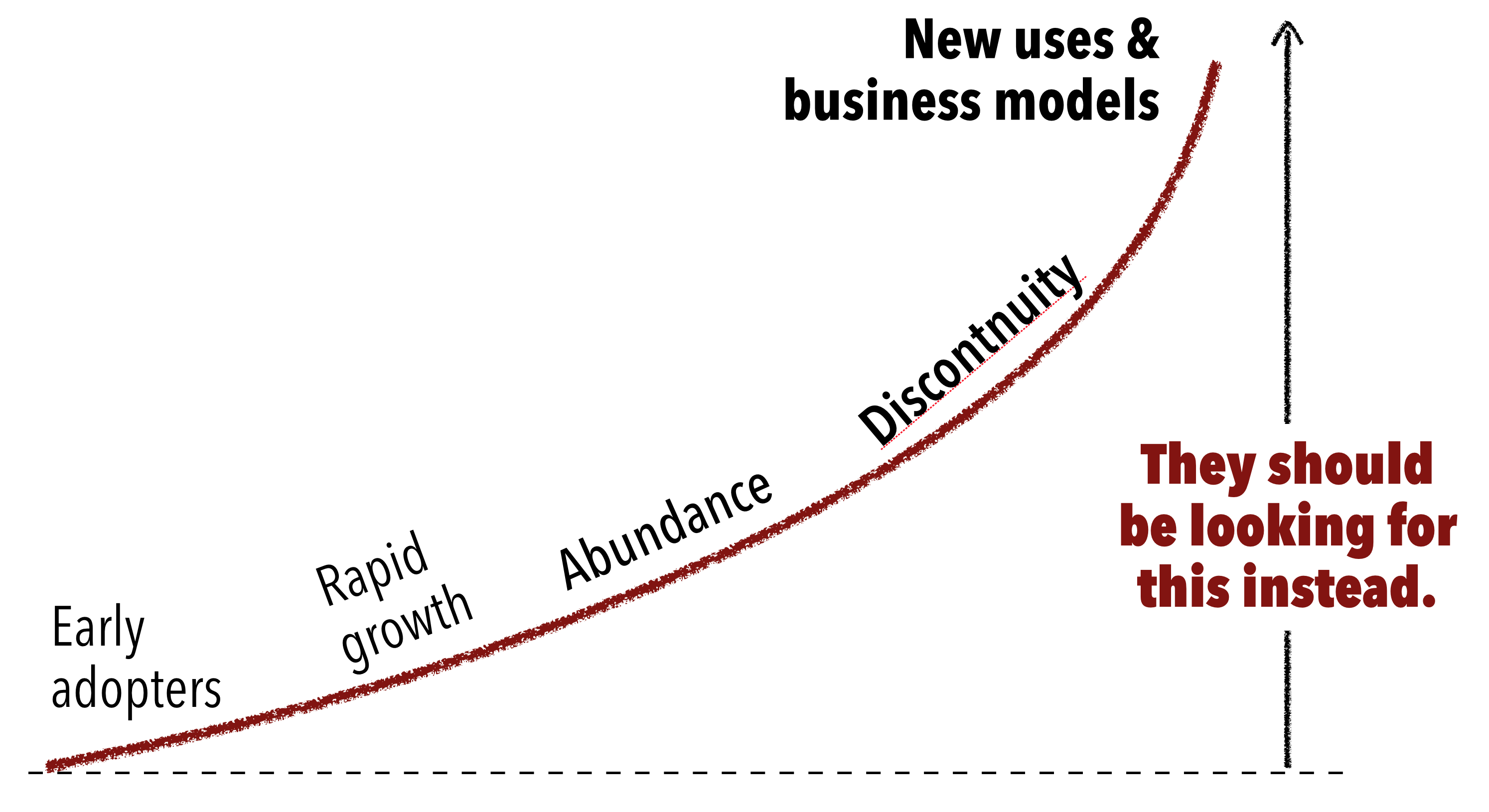 A century after Jevons, economist, Thomas Osenton, studied how much demand existed in a particular market. This is known as the theory of natural limits, and it proposes that all companies reach a level of innovation saturation, beyond which growth becomes extremely expensive, yielding diminishing returns on investment.

The best startups don’t accept these limits. They find markets that are paradoxical, making their own gravy, creating more demand as they grow.

– Look at the omnipresent smartphone, and the almost infinite new applications it spawned—a far cry from the rarefied market of doctors and stock traders who were its initial market.
– Consider Facebook, and how far it’s come from the early days of university chatrooms.
– There’s Dropbox, which made offsite backups into a consumer product.
– And Hotmail, which took enterprise messaging and gave email to the world.

Unintended use cases and customers emerge, expanding the market beyond the limits everyone thought existed. In the best cases, these products represent discontinuities—changing society so significantly we can’t imagine what life was like before them.

There’s another limit startups can chase in pursuit of a new business model: Product innovation. 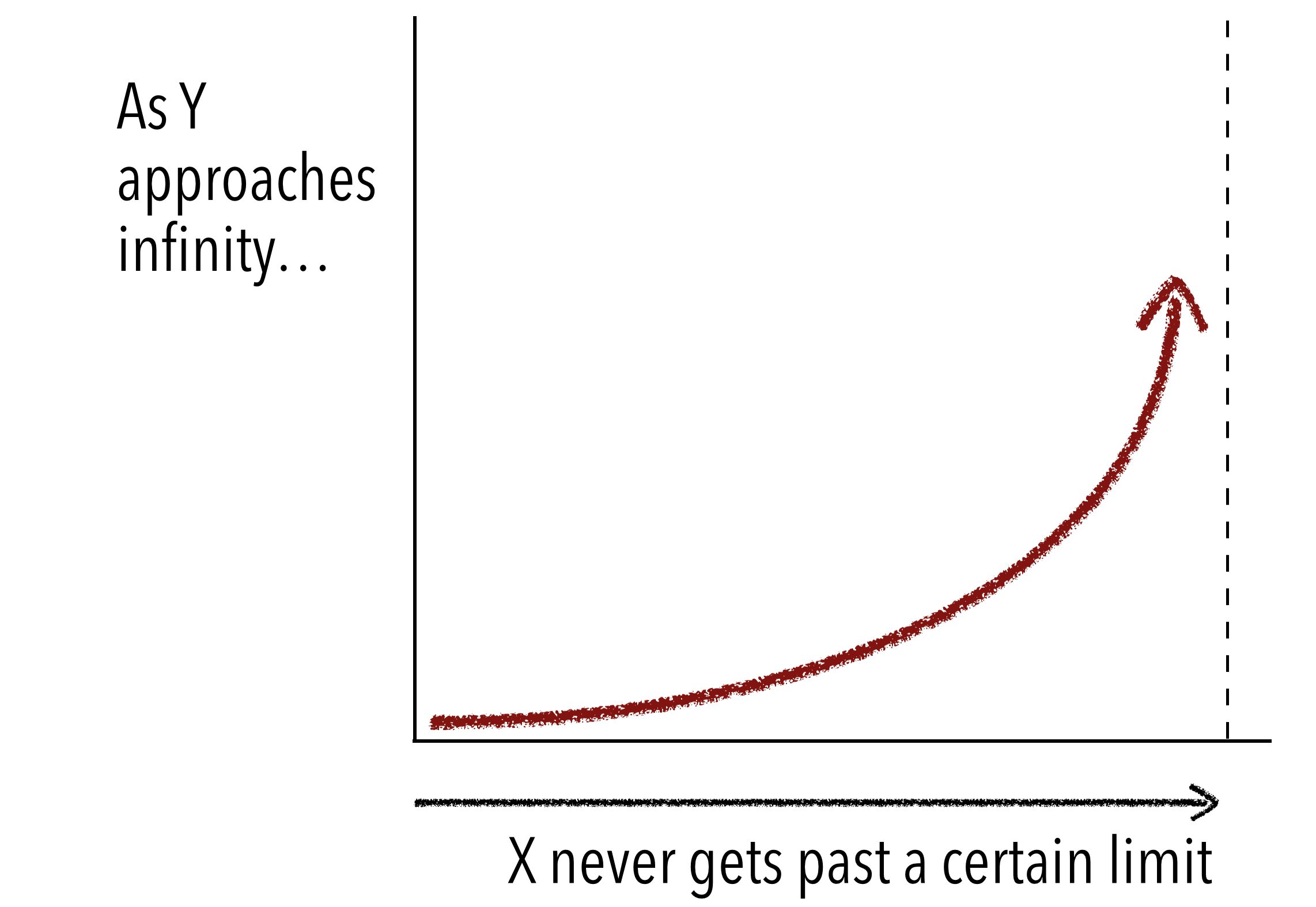 Incremental growth, sustaining innovation, and gradual improvements are fine for existing companies. Unfortunately, as a company grows, it often slows. That’s because “more of the same” leads inexorably to inefficiency. In its efforts to scale, the company focuses on standardization and repetition. There’s a natural limit built into the business model, and pushing past it becomes harder. Blockbuster loved late fees and in-store concessions, and couldn’t push past these limits even though fixed-fee streaming represented a far more profitable opportunity.

For a startup to succeed, particularly against large incumbents, it needs a fundamental change. The history of computing shows that Moore’s Law—slow and steady—isn’t behind fundamental advances in computing. From the techniques that cracked the human genome (shotgun sequencing), to the basis of scalable data processing (Hadoop and Spark), to the algorithms that made modern AI possible (Tensorflow), giant leaps forward happen not because of more, but because of different. 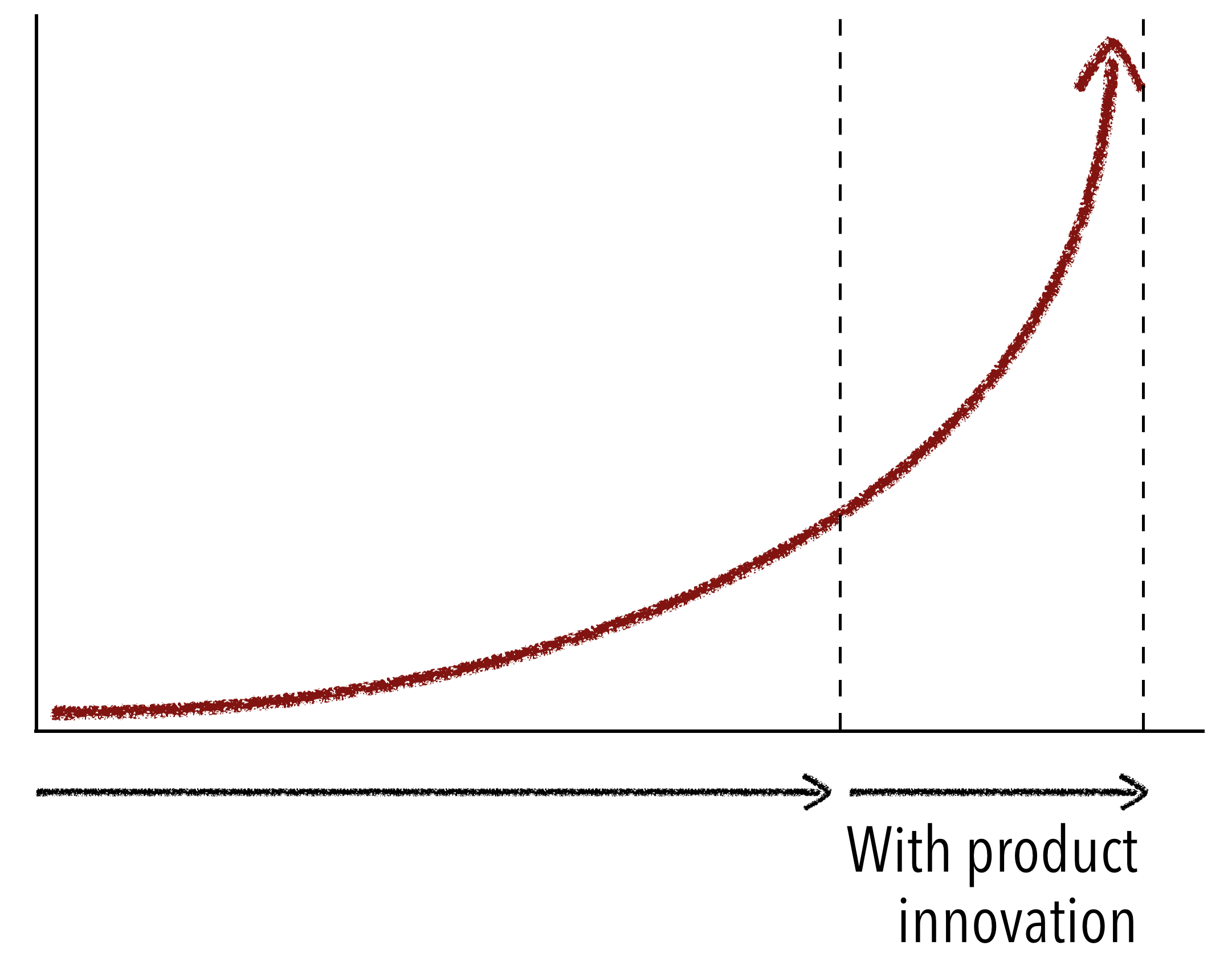 In mathematical terms, the way to move the limit is to change the function itself. In business, rather than pushing harder and harder against an existing limit, the best innovations rewrite what’s possible itself.

Startups search for product-market fit—the moment when they find the right solution to the demand from a sustainable market. But simply offering an existing product to an existing market isn’t enough.

Every founder knows that only one in a thousand new ventures will truly succeed, because it’s pushing against the limits of product and market that everyone else accepts. The founders themselves have to be irrational, driven, and even a bit delusional. But because of them, their startup can overcome a market’s natural limits, and redefine what’s possible with technology.

So in our eighth year, we want to explore the limits of existing business models, and how to push past them. We’ll look at how to launch into markets where supply creates demand. the latest innovations that fundamentally alter what’s possible with technology. We’ll ask ourselves what it means to adopt a truly limitless mindset, and as we do so, forever change the world we know.